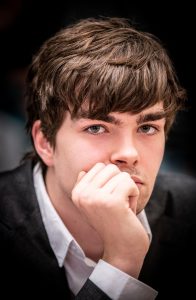 He participates in the TePe Sigeman Chess Tournament for the first time.

3) Who taught you how to play chess?
My father taught me the rules of the game.

4) What was your first big tournament success (tournament win or similar)?
When I was 14 years old I won the European Youth Championship up to 14.

5) Do you sometimes also participate in other sports/games? If so, which and at what level?
Sometimes I like to go jogging. I also enjoy playing football for fun, but I am exceptionally bad at it 🙂

6) Do you have any family members or relatives that also play chess? If so, who and at what level?
All my siblings can play chess. Everyone at a different level. My brother Lucas is also a strong GM, while my sister of 13 is about 2150.

7) What would you be doing today, if you did not play chess professionally?
I would be studying in university most likely. I would have no idea what to study however!

8) What is your main strength as a chess player?
My fide rating tells me what I am worth.

9) Do you have any superstitions when you sit down at the chess board before a tournament game?
Not really, I might wanna play with the same pen if I win a game, but usually I lose all my pens anyway.

10) What do you hope to achieve in the 2021 TePe Sigeman & Co Chess Tournament?
For me it is an opportunity to play against legends, prodigies and modern world class players. I expect many fighting games, and I hope I learn a lot from the games I will play there.