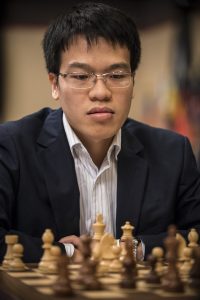 He participates in the TePe Sigeman Chess Tournament for the first time.

3) Who taught you how to play chess?
My older brother was my first chess teacher.

5) Do you sometimes also participate in other sports/games? If so, which and at what level?
I like going to the gym and walking for physical exercises. I sometimes watch some other sports, but am not competitive there.

6) Do you have any family members or relatives that also play chess? If so, who and at what level?
My older brother (my first chess teacher) is an International Master (IM), but he only plays chess for fun. He is also a Phd and works as a research scientist.

8) What is your main strength as a chess player?
I think I have solid understanding and experience. I am also motivated to learn more and fight hard in all my games.

9) Do you have any superstitions when you sit down at the chess board before a tournament game?
Not really a superstition, but I like to use one same pen during a tournament.

10) What do you hope to achieve in the 2021 TePe Sigeman & Co Chess Tournament?
This will be my first appearance here. I look forward to a very competitive tournament with so many strong opponents. It will be a special honor to play former world champion Anatoly Karpov. I will try my best in every game, and hope that will be enough to win the event.