Four players per team play each match, two are reserves.

Due to the pandemic, the International Chess Federation launches a new concept: a tournament combining playing online and with a physical board.

Malmö is one of the cities, and will meet Barcelona, Bratislava and Oslo. The teams gather in their respective venue, with each player in front of an chess board. Moves are automatically transmitted to the opponents, and the players are supervised by cameras and arbiters.

When the Swedish national league was played for the first time 1950, long distant matches were allowed to be played by phone. It is time again!

The starting field is an interesting mix of legends, young stars on the rise and top players: 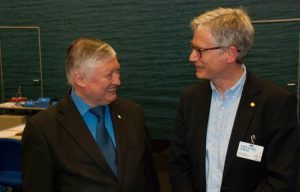 Lars OA Hedlund has made a video about the 2019 edition of the tournament.

…and it is all over! Seven days filled with combative games is at an end. Gawain Jones claimed first place and the audience has been treated to chess fireworks during the last week.

The much anticipated decider between Gawain Jones and Pentala Harikrishna never really got going as Jones played a very solid game as white. Pentala saw no realistic winning chances in a barren position and accepted the fully justified draw offer. Gawain was champion!

Parham Maghsoodloo experimented in the opening as black against Dieter Nisipeanu. It quickly resulted in a worse position and soon Dieter had both an extra pawn and a won position. Time trouble made the German lose his way and Parham made a fortunate escape.

Both Nihal Sarin and Tiger Hillarp Persson used a surprising amount of time playing well known theory. Tiger managed to snatch a pawn, but couldn’t convert it into a win and had to settle for the draw.

The tournament’s very last game was Ivan Saric against Nils Grandelius. A seemingly equal middlegame all of a sudden turned lethal for black as another opposite coloured bishop position appeared. Nils missed the devastating Rxe5 and Ivan was winning, but the Swede saved the game miraculously. An entertaining end to and entertaining tournament!

TePe Sigeman & Co Chess Tournament would like to thank the players for taking part and providing the audience with exciting chess every minute of the seven rounds. We would also like to extend our gratitude to the sponsors, partners and the venue Malmö Live.