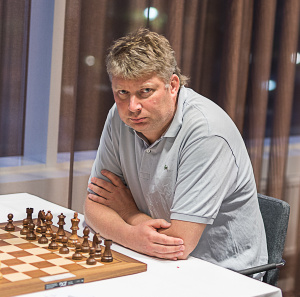 IGM Alexei Shirov was born in Riga, Latvia, but has represented Spain for many years. The 48-year-old has for many years been a regular participant in the top tournaments and was once number 4 on the world chess federation rating list.

In 1998, Shirov defeated Vladimir Kramnik in a match over the right to challenge world champion Garri Kasparov, but the match never found any sponsors and was never played. In the controversy that followed upon this, Kasparov chose to play Kramnik instead.

He is often compared to another Latvian, his old coach and former world champion Mikhail Tal. His will to attack and entertain, combined with the risky openings that he sometimes likes to play, has sometimes been to his disadvantage when playing the very best. Chess fans, on the other hand, are grateful that there are players like Shirov, who’s autobiography in two parts has the fitting name “Fire on Board”.

Shirov participated in the Sigeman & Co Chess tournament in 2011, where he finished in 4th place.

1) How many years have you played chess professionally?
Maybe the right answer would be since 1986 when I started trying hard.

3) Who taught you how to play chess?
My elder brother.

4) What was your first big tournament success (tournament win or similar)?
Probably winning World under 16 in 1988. I was 16.

5) Do you sometimes also participate in other sports/games? If so, which and at what level?
In cross-country skiing when I was a schoolboy. No success.

6) Do you have any family members or relatives that also play chess? If so, who and at what level?
My father was at about 2000 level.

7) What would you be doing today, if you did not play chess professionally?
Maybe politics.

8) What is your main strength as a chess player?
Right now – none. In the past it was a good knowledge of the game according to the standards of those times.

9) Do you have any superstitions when you sit down at the chess board before a tournament game?
No.